florencethemachine wrote:Smackdown has been laying the smackdown (pun intended) on RAW in terms of wrasslin and angle building. They definitely acquired AJ's services at the right time because that guy has been white hot since he came in. I love the irony of WWE now relying on the draw of homegrown TNA stars to bolster their roster (I am aware that AJ and Joe were both involved in developmental with WWE).

Having never been clued up on NJPW I have went back and watched some of Meltzer's 4+ star rated matches. Holy shit they have some next level sequences and great matches. The hype around Omega vs Okada has definitely shone a spotlight on NJPW for a lot of westerners.

NJPW has had some stellar matches over the years. Anything involving Okada, Nakamura and Tanahashi is often gold. Shibata, Goto, Ishii and a number of others are all worth checking out too.

This year's Money in the Bank PPV is shaping up nicely:

Men's MITB Match:
Braun vs Finn vs Miz vs Ruzev vs Roode vs Owens vs a member of the New Day vs either Samoa Joe or Big Cass

Women's MITB match:
Ember vs Charlotte vs Alexa vs Becky vs either Billie or Lana (possibly more to be added)

WWE's booking for Smackdown and Raw still makes my head hurt, especially for the "top" guys like Roman and Mahal. I only watch the short segments on youtube for those two shows now and I'd say I'm happier than I have been in a long time about WWE because of this.

I do watch every PPV though (and go to the live shows that are near me), and MITB does look to be a good PPV, but the decisions on who is going over it going to make or break that as there are some feuds that are just dragging.

I much prefer the booking and format of NXT and 205 Live. I'm really looking forward to seeing NXT live @ Download this weekend.

I recently subscribed to NJPW's streaming app, which is just awful, makes the WWE streaming app look a masterpiece. I know very little about NJPW other than what I have seen in the recent Super Juniors tournament but I am really liking what I have seen as that whole tournament has had a good mix of fun matches, brutal matches, high flying, technical, etc. Managed to pick up some tickets for the NJPW UK show in MK I'm that impressed, even if a big chunk of the Western wrestlers will be at the RoH event in the US that weekend.
Top

I try and watch every PPV, though I feel that may go by the wayside now that the standard length PPV is 4 hours it is a bit of a slog. I do enjoy all the NXT Takeover shows though, and I try and keep up the the tv show and 205 Live.

Speaking of 205, I'm looking forward to seeing what Lio Rush brings to the table. I've heard excellent things from his Indy appearances.

I hear you with the PPV length, we tend to watch it over two nights most of the time. Only one I've seen live recently is the Greatest Royal Rumble and that was hard work in places.

I really don't know where they are going with 205 as it needs a longer show to make the most of the talent they have already on the show and will likely be moving across from NXT. They do a good job of featuring as many guys as they can but it is an uphill battle as long as they are tied to the Smackdown taping session. Some PPV style events would be nice for them as well, if NXT have them then why not 205?

Hopefully the new tag titles (please be 6 man tag titles) that are rumoured will mean expansion rather than shoe horning in more to the limited time they have.

Lio does look awesome from the limited clips I've seen on youtube, but where is he going to fit in as its already stacked.
Top

I feel sorry for the 205 guys. I think it is stupid putting the show on after the main show where the crowd's energy is already zapped after having to endure hours of nothingness essentially.

Watched Cedric Alexander vs Buddy Murphy which was a pretty decent 4* match in my eyes.

I am also going to the NJPW show in Milton Keynes. Will be good to watch some decent wrestling and wash the bad taste out of my mouth after making the mistake of watching SD live last year.

Has it been announced if Smackdown is moving to a three hour show with its move to Fox later in the year? Only reason I'd want that to happen is to force WWE to move 205 to its own circuit for tapings and get a longer show to boot.

I enjoyed the Alexander/Murphy match but I think NXT has had better matches. The six man ladder match and the Gargano/Ciampa match from Take Over New Orleans are two of my favorite matches I've seen in ages. Really looking forward to Take Over Chicago.

Was it an actual Smackdown Live show or just a house show? I can see the potential for lots of tedium with the Live show.
Top

Johnny Saint (!) announced as the GM to the UK Brand apparently.

I'm sure they did that in part because of the ITV wrestling show that is starting soon. Will be interesting what that ITV show is actually going to be like.

Is Regal moving across to run the UK arm now as well?
Top

Tankplanker wrote:I'm sure they did that in part because of the ITV wrestling show that is starting soon. Will be interesting what that ITV show is actually going to be like.

Is Regal moving across to run the UK arm now as well?

If it's anything like that show they tried on NYE in 2016(I think?) then I don't think WWE need to worry - that was terrible.

Of all the garbage I've suffered through as a WWE fan over the years, I still don't think I've ever been as embarrassed to watch a wrestling show as I was with that last World of Sport abomination.
Top

I'm lucky I never saw that.

Great weekend of wrestling for me, did NXT @ Download over the three days and watched Dominion in the mornings before ending up to Donington.

Dominion was really good, Jericho was the surprise performance for me (I knew Okada vs. Omega would be top draw) as he wasn't taking the easy pay day, brutal match in places.

NXT was also really good. If you get the chance to see them live you have to go, better quality live show than either of the main two WWE brands at present. Highlights for me was Johnny vs. Ciampa, Dunne vs. Ciampa (with a swerve finish that fooled most of the crowd), and a six man tag of Dream, Lars, Ciampa vs. Ricochet, Johnny, Black. The six man tag finished with a two man power bomb/Black Mass on Lars to put Lars through the table. Ciampa just an amazing generator for heat, and a really good wrestler as well, just hope he is used properly when he is called up. 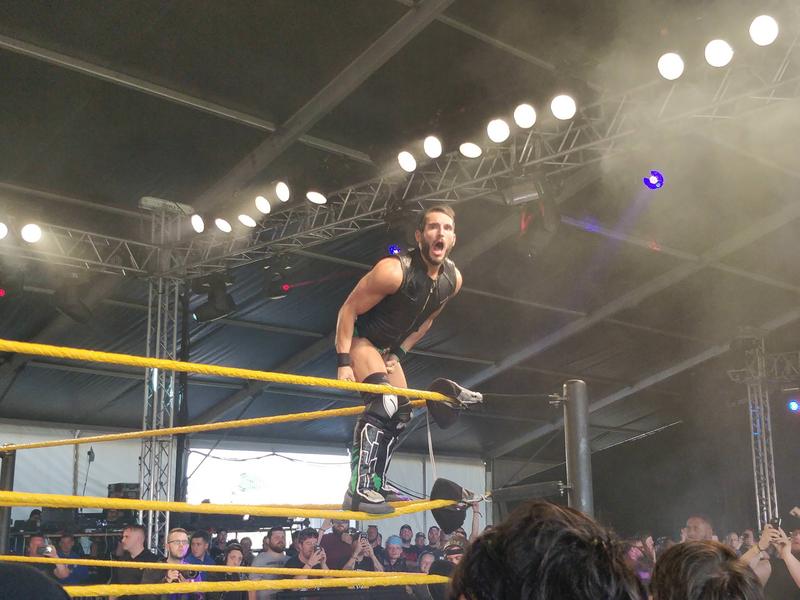 I was only there for the Saturday so I only saw one of the NXT shows (the earlier one) and it was pretty good. Velveteen Dream is excellent at working the crowd and from what I saw of the signings, is 100% committed to his gimmick which is refreshing to see these days.

I watched Dominion on the Sunday - Jericho once again proved why he is head and shoulders above everybody else in wrestling right now and I was exhausted at the end of that Omega v Okada match! It was definitely an epic but I'm sure Meltzer will gush over it as the best thing ever just because it was a 60min+ main event in Japan (which seems to be his only criteria these days) - it was damn good but far from the best match I've ever seen.
Top

Yeah I've seen that Meltzer is indeed calling it the greatest match ever and as good as it was it isn't a match I'm itching to immediately watch again unlike some other matches I've seen this year or even like with previous Okada vs. Omega matches. I'm sure Meltzer will further break the 5 star system with it though.

Dream really has worked hard. While she is still pretty green Belair impressed me with her commitment to her gimmick, future PPV main eventer if they keep developing her right.
Top

Tankplanker wrote:Yeah I've seen that Meltzer is indeed calling it the greatest match ever and as good as it was it isn't a match I'm itching to immediately watch again unlike some other matches I've seen this year or even like with previous Okada vs. Omega matches. I'm sure Meltzer will further break the 5 star system with it though.

See I didn't even have to look up any comments from him to know what his view is gonna be. I really don't know why so many people in wrestling hang on his every word like he's the fucking oracle. He's quickly becoming a parody of himself.

Now I'm not a huge fan of Carmella's work by any means but I had to laugh when someone tweeted her to ask what she thought of Dave Meltzer's criticism of her recent matches and she responded by saying "who?" - just shows how much the IWC can bitch and argue about the merits of various wrestlers and promotions and what Meltzer's view is on anything and everything but ultimately, WWE couldn't give less of a shit and I actually kind of like that.
Top

Carmella gets so many nasty comments directed at her I hope she goes on for a long rein with the title for nothing more than her responses to the people being upset with her approach to just about everything as she is really good at dealing with the heckles and it really winds up a section of the wrestling community I can't stand.
Top
Post Reply
5836 posts