Also Hiromu Takahashi doesn't appear to have a broken neck which is great news.

The G1 so far has had plenty of outstanding matches, really good cards each day. I've got day 3 to watch tonight.

Suffered through Extreme Rules yesterday and the Raw highlights on youtube this morning. Totally predictable trash.

BtE was pretty good this week, wishing I was on Y2J's cruise now.
Top

Watched Extreme Rules last night/this morning. Was a very average show although I enjoyed the Strowman/Owens cage match and I would have enjoyed the Ziggler/Rollins match way more if not for the obnoxious, pathetic, attention-seeking bellends in the crowd. Seriously - wtf.
Top

I thought the Ziggler/Rollins match from Raw was better, the one from Extreme Rules had stalling and a quick roll up, but latter on multiple finishers and kick outs. Both wrestlers can put on a very good match, its just the structure of the entire iron man match was back to front.

I think by the end of the PPV the crowd had just had enough and would have likely shat on just about any match. Extending the PPVs to nearly 4 hours by adding endless promos and other rubbish that doesn't really translate to an arena, while pushing meaningless feuds and often boring matches (see most of this PPV) no wonder they are going to be bored at the end.

The whole Strowman/Owens feud confuses me, Strowman is clearly being booked as a bullying monster heel and Owens as the face, yet called as Strowman the baby face and Owens as the heel. The match itself wasn't bad and the bump at the end was the second most crazy one of the night, after Lashelys - Orton broke a collar bone with a similar botched landing.

Lashley vs. Reins was probably one of the best matches on the PPV, but I have zero interest in seeing them wrestle again, there is just nothing of interest for me in this feud. Yet we get them facing off next week, and more than likely again at Summerslam for the belt with or without Brock.
Top

I know what you mean about the PPV length - WWE really need to rein that shit in as even shows which are chock full of good matches like New Japan's can be a bit of an endurance test when they go over the 3-4 hour mark.

Of course it didn't help that aside from Strowman v Owens, the whole show up to that point felt like a bloated episode of Raw or Smackdown and for a show called "Extreme Rules", there were a grand total of 2 matches that anything remotely "Extreme" about them.

I still think that despite the run-time, the crowd shouldn't have reacted the way that they did and is just another example of the attention-seeking, "look-at-me" attitude of what is becoming a worryingly large section of the audience, especially when it's guys like Ziggler and Rollins who they all claim to love so much.

This is why I actually got put off going to British indie shows because I was coming across too much of that stupid mentality. Just people trying to get everyone to pay attention to them rather than the wrestlers by shouting stupid shit because they thought they were suddenly comedians, when in fact they were just morons.
Top

Until the wrestlers acknowledge the idiots and stop wrestling rather than ignoring or even worse playing up to them you'll not make much progress on the idiots.

The dueling chants for somebody like Cena or even Roman don't bother me. It is the single loud mouthed idiot saying stuff that is so cringey I actually feel bad for them that would turn me off live shows if it was more prevalent at the ones I go to. They need putting down like a good comedian would do with such a heckler.

The top stars at WWE seem to be protected from taking major bumps. Alexa has Mickey to take almost all of the serious bumps, Carmella has Ellsworth, Roman was only allowed to jump outside if the whole locker room was ready to catch him, and AJ is a shadow of what he was. Meanwhile KO is free to copy Shane/Mankind.

If the top stars aren't allowed to take the big bumps then I can see why they wouldn't want the mid card potentially outshining the top stars' matches with the aid of a good gimmick match. The obvious answer would have been to rebrand Extreme Rules as something else (plenty of names in the copyright bag @ WWE they could have used), but when does WWE do something sensible?
Top

Judging by what you guys have said I'm not sure if I am going to even bother with the highlights for Extreme Rules.

Also agreed on the annoyance of smarky chants. I fucking despise the "one fall" and "We/this is awesome" chants with a passion.

florencethemachine wrote:Judging by what you guys have said I'm not sure if I am going to even bother with the highlights for Extreme Rules.

Also agreed on the annoyance of smarky chants. I fucking despise the "one fall" and "We/this is awesome" chants with a passion.

I've always hated the whole "one fall" thing. Pisses me off no end.
Top

Tankplanker wrote:Until the wrestlers acknowledge the idiots and stop wrestling rather than ignoring or even worse playing up to them you'll not make much progress on the idiots.

I actually think wrestlers should go down this route a lot more. Obviously in WWE they can't really confront fans directly due to the PG nature of the product but at indie shows, I would love a wrestler to just march up to some loud-mouth prick and confront them head-on (without getting physical of course) - 99.9% of these idiots would shit themselves immediately and not utter another asinine comment for the whole show.
Top

Tankplanker wrote:Until the wrestlers acknowledge the idiots and stop wrestling rather than ignoring or even worse playing up to them you'll not make much progress on the idiots.

I actually think wrestlers should go down this route a lot more. Obviously in WWE they can't really confront fans directly due to the PG nature of the product but at indie shows, I would love a wrestler to just march up to some loud-mouth prick and confront them head-on (without getting physical of course) - 99.9% of these idiots would shit themselves immediately and not utter another asinine comment for the whole show.

Takeover was excellent, as has become the norm now. Not watched SummerSlam bar the main event yet. I actually thought the way they booked Reigns / Lesnar (the match) was pretty good. Keep it short and sweet, and use Braun to keep the crowd happy / distracted.

I enjoyed Takeover. I keep winding my kids up that Johnny is turning heel (looking more and more likely) and will be reforming DIY with Tommaso before being called up to the main roster.

We are about half way through Summerslam. All three matches from the pre show (I think I've never bothered watching the pre show before) were too short and had big Summerslam advertising sections all over them, wasted mine and the wrestlers time.

Bludgeons vs New Day looked frenetic and rushed, not surprised Rowan ended up injured. Braun vs. KO was terrible, complete waste of 60 seconds. Dolph vs. Seth was good, clearly they kept this feud going to Summerslam to help boost the overall match quality for Summerslam.

Carmella in the triple threat with Becky and Charlotte really turned on the wrestling skills for this one. The predictable turn at the end completely backfired and now we have a female Roman Reins, awesome. Not a classic for the ages but a very good match indeed.

AJ vs. Joe was everything you would expect from these two considering this will be just the first of many in this feud.

Off to NXT UK this weekend, not happy that they haven't aired the first four shows yet, means I'm stuck reading spoilers from the last taping to find out what is going on for my shows.
Top

Apparently the main focus of the NXT UK shows in Brum this weekend is the crowning of the first NXT UK Womens champion, so may not need too much of a prior knowledge. It's an 8 women tournament, so I am guessing quarter finals on night 1 and Semis and final on night 2.

That sounds great, get to see some history in the making. I'm expecting Toni Storm to be the UK Women's champ (as would most people I would guess).

Watched the final half of Summerslam, decent not amazing PPV in the end. Interesting how the Shield have been booked for Raw this week, have WWE given up on traditional heels and faces?
Top 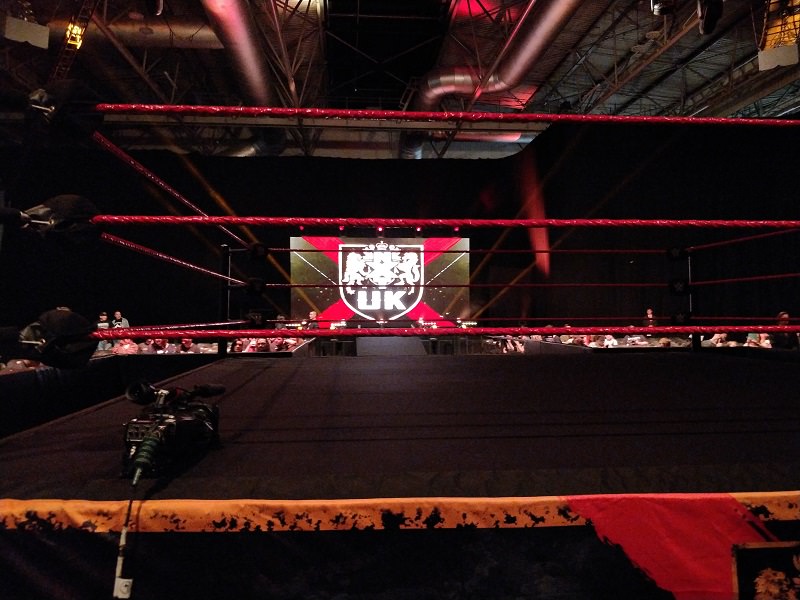 Good night of wrestling last night and really looking forward to tonight for part 2. They made a big deal of no photography or smartphones during the matches, a bit annoying.

Xavier Woods opened the show, big speech that the wrestlers are going to give everything and we (the fans) also need to give everything as this is our chance to build NXT UK the same as NXT US has been built over the last few years. He brought out Dunne and Bate to show off both of them in the next WWE game.

HHH came out with the women competing in the UK tournament, showed off the belt. We had a ton of women's matches, the 4 quarter finals and 1 dark match, so bit over 1/3rd of the card for women, great to see such progress.

A few squash matches for the men against some jobbers, but the rest were good. Mustache Mountain, Dunne, Kai were the only "names" from NXT on the show, not sure how well it will do attracting a global audience on WWE Network.

A few people trying to put themselves over including a guy with a large number of signs ringside.
Top
Post Reply
5836 posts