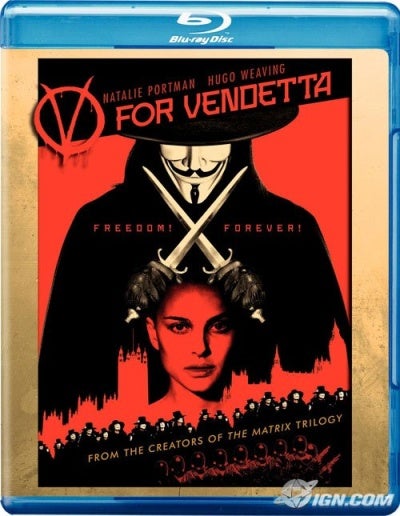 I have to say, this film is so underrated, I love the graphic novel aswell and this is a pretty good adaptation but with some bits added as the book is very story driven and not much action, but also bits removed as it is incredibly violent, it's been moviefied so to speak

Awesome performances, Natalie Portman looks beautiful and shows complete vulnerability and every emotion going especially during the torture scenes. The FX are awesome throughout aswell, cheap this wasn't

Andy Hall wrote:I have to say, this film is so underrated

Never heard a bad word against it.

Applecore wrote:Weakest of the trilogy, but still a shitload of fun.
Top stuff.

Very much my thoughts.
To quote a post I made elsewhere "I found a lot of it almost quite touching, and almost tragic. And I was glad then managed to fit those more serious moments into the comedy without them seeming ham-fistedly wedged in."

Yeah, I know what you mean. It had a really nice flow to it and those scenes seemed to come pretty much naturally.
Buy me a beer at:
8-11/8 - Bloodstock
Top

So the next Jackass movie is going down the mockumentry route and looks hilarious. And the end section while kinda sick was amazing at the same time

A couple move into a house, the wife gets possessed and oh god it's just so f**king terrible I can't go on.
1/10

Hardware is great.
It was also the first time I heard Ministry.

Saw The Wolverine last night. Good fun but I'm struggling to really get into Wolverine as a character. He just seems so.. basic. I can get what Wolverine gives elsewhere, if that makes any sense?
And I think I've sussed out why they fucked up Deadpool in Origins. If they'd done him right, he'd have stolen the show completely - he's got everything Wolverine has (bar the claws, but he has swords) but is loads more fun.
So, y'know, hurry up with that Deadpool movie, guys.
Buy me a beer at:
8-11/8 - Bloodstock
Top

The problem they have with Deadpool is that to make a proper movie they would have to PG13 him down, you can do that with Logan as he's aprt of the X Men and they have always been pretty easy to PG13

Deadpool however is very much an adult character, to do a stand alone movie, you would basically have to re-create him and they may aswell rename him after that

Know what I want to see? A Punisher vs Wolverine movie.

Because it means Hugh Jackman gets his face, balls and knees shot off, and then run over by a steam roller.


Nothing against Hugh Jackman, I just think it would be pretty funny.
If I like it, It's probably awful.

Clutch, Kamelot and The Ocean for BOA 2014 pls!
Top

Andy, if anything needed renaming, it was the weird excuse for Deadpool that they had in Origins.
What bugs me though, is that at the start, when you had Wade Wilson swinging his swords, being awesome and cocky, they really just needed to give him a healing factor and put him in a red morphsuit and they'd have had Deadpool. The whole bollocks with him not being able to talk (so much for the Merc With a Mouth), making him able to steal mutants powers and putting the swords in his arms like Logan's claws, just made him completely unrecognisable as Deadpool.

As for a standalone Deadpool movie, Ryan Reynolds has said:

“the way we want to do it is pretty nasty, and pretty hard. You can’t exactly have a $200 million budget when you want to do a movie like this.”

Plus with the video game that's just come out, the Deadpool we know and love is becoming more and more known in the public eye. Comic book hero movies don't HAVE to be PG-13 - look at The Punisher, the last 2 movies have been no holds barred, R-rated stuff. And that's how (I'm hoping) they're going to do Deadpool.
Buy me a beer at:
8-11/8 - Bloodstock
Top

I'd be well up for Ryan Reynolds doing nasty.

He was actually pretty damn good in Amityville Horror.

I completely agree on every point, but the R rated superhero movies havn't exactly set the world alight, look at Dredd, awesome film, no bugger went to see it

Myself included, I will not watch a 3d film ever again