My favourite part was where they included gameplay slowdown in the trailer. Doesn't exactly inspire faith...
Top

Looks exactly like the last one - which came out in what, 2004? I like the series so I'll give it a go, but I think it's probably had it's day.
BANDS I LIKE FOR BLOODSTOCK!!!
Top

Played a few online battles on Dragonball xenoverse against a guy who had made his character weak on purpose and selected body change as his only ability, he beat me twice, once because time ran out and once because he waited until he was nearly dead to switch, then hit me with my own ultimate (special beam cannon). So the third time I went a shitty frieza henchman and was beating him down, as soon as he switched he realised two things: the frieza henchman was weaker than his character, and I am much better than him.

Also Dying Light continues to be awesome. I'm surprisingly emotionally attached to some of these characters.

I need to get back to that, I just have too much to catch up on at the minute.
Also, GTA heists are supposed to be out today. I will believe it when I see it myself, which I will in a minute. Better be damn good after waiting what, a year and a half now?

Finished Danganronpa. That was an absolutely excellent game, but the ending made me furious.

First heist on GTA online is a small bank, 2 set up missions then the heist itself. Simple and easy but good fun. Second heist was fantastic. Its a prison break with 4 set up missions, stealing a plane, stealing a prison bus, and then splitting into 2 teams for the next two. Third mission had one team posing as cops stealing a prisoner transfer schedule and another stealing a classic sports car from a ship at the docks, me and my crewmate (only one left although we were playing with friends) got the car. Next mission was 2 assassinations. 1 at the town hall taking out lawyers, 1 at a mansion taking down a paranoid rich guy. We did the mansion which involved a lot of sniping and stealth. The heist itself split the team in 3. 1 player gets the plane we stored at the airport and flies towards the prison to pick up the team + prisoner, 1 player destroys the real prison transport so that we could sneak in with the stolen bus. I was disguised as a prison officer and my crewmate was a prisoner. We snuck in but ended up having to fight our way through, I was doing the shooting as I had an assault rifle while my crewmate protected the prisoner as he just had a pistol. We made it through slowly and got to the pilot, the demolitions guy appears in an attack helicopter and clears the runway so we can escape.
A lot of work went into this, so I suppose the wait was worth it. There are only 5 but there are plenty of different roles to take and challenges within them so 5 is enough for now.

Saw the Achievement Hunter guys had put up a video of the first heist. Will be watching that later!

Can't see me playing any for the time being, as I'm still not doing the whole "online gaming" thing just now, and I'm going to guess that the update I'd need to download is huge?
Buy me a beer at:
8-11/8 - Bloodstock
Top

Me and my mate have done a GTA video now, i did the editing this time so I slipped to Motorhead in it.

Me and my mate have done a GTA video now, i did the editing this time so I slipped to Motorhead in it.

CS:GO is so daft sometimes.

In competitive matches it puts people in game based on ranks such as.. 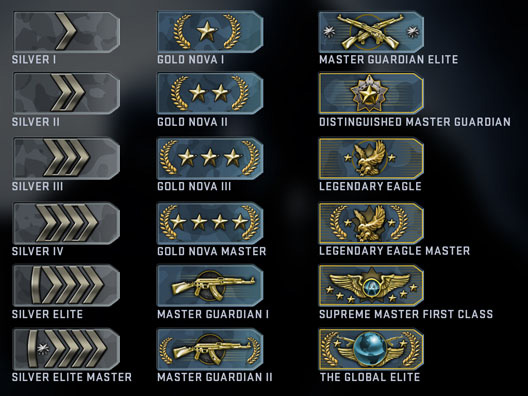 There can be a fair bit of difference between the lowest ranks, nevermind the silver and gold ranks.

Just played two games with a group of guys, 2x unranked, 2x Silver 3 and 1x Silver 4. We got paired against a full team of Silver Elite Masters both times, as in we had no fucking chance.

That ranking / matchmaking system is so fucked

Death to Power Pop!! It should go down with the sinking ship that is Download festival.
Top

I really enjoyed DmC when it came out. Sure, bits of the plot / dialogue were absolutely cringe, but the atmosphere, aesthetic and mechanics were fantastic. Smashing in demons whilst Combichrist blares in the background was a hell of a lot of fun.