Im told there is a special deal on Borderlands 2 and 3. Dunno what it is yet but ill invest. I think they're all backwards compatible now so its not as if I have to fire up the 360.
Top

I'm a little excited by Dark Souls 3, but unfortunately I've mainly got that WoW crack back in me.

Sat in the morning considering a sick day cos I've got levelling to do.

Picked up the Elder Scrolls Online on PS4 for £8, might as well get my MMO fix now that WoW is boring me a bit. Ah well not long until Legion

Mate on fb has taken a picture of his box and it looks fit as fuck. I mean the box of Dark Souls 3, what was YOU thinking I meant?
Top

Took forever to get here but it's finally arrived! Didn't arrive until after 5 but looks well worth the wait! 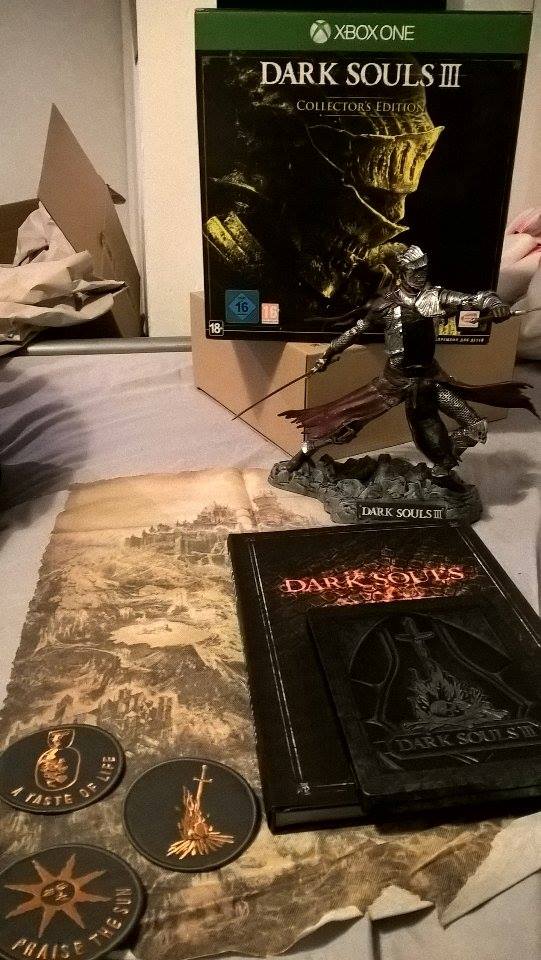 I'm surprised it didn't give you a million paper cuts.


Oh my fucking fuck fuck, As a WW1 + ww2 enthusiast I can not wait, I was hoping for a world war two game but the trailer has already sold me. I wonder if one of the weapons is the bag pipes playing towards the German Trenches on the Somme.

Fuck yessssssss. Been way too long for world war shooter.

Cod is murder death kill. That trailer looks special. Might even get it for PC. Preview it on EA Access. Nice.

I am back on Ark. Had a guy from another tribe jump into our party complaining one of our chaps had blown his bridge up. He built in the north, he told us we cannot claim the north. So we blew his base up, and reclaimed the north. I was toying with the idea of walling off the north actually but that would be like 3 weeks worth of resource collecting.

Completed Battlefield 4 finally. All on hard, short as hell...only 7 missions.


Battlefield Hardline is back up next. I stopped part way through because it was fucking awful, but ill soldier through it maybe tomorrow.
Top

After thinking I wasn't a big FPS guy, Doom has reminded me I'm just not a fan of the newer mechanics.

I am going to get that. Possibly for PC once its built. It doesn't look like the sort of thing my rabble would be interested in so I am not losing anything by not having it on xbox. I think we're all super excited about Battlefield 1. Hopefully have a really good take on the original 'I want to fuck these clowns up' Battlefield theme too, last two have been dreadful and not even sure it made an appearance in BF Hardline. Possibly because it doesn't feel like a Battlefield...or even a game I would be half interested it with characters I would happily throw into the path of tank...if it were a Battlefield and had tanks...fuck Battlefield Hardline.
Top

So relieved after that shithouse multiplayer beta.