The Lost Boys is possibly my most watched film of all time but I've never seen the two sequels. They have to be crap.

Again, watched the first Hellraiser back in the 80's, kinda enjoyed it but never seen any of the sequels.
Top

Ghost wrote:Wow didn't realise there were so many puppet master films ha ha. Think I only saw the first one when it came out. You took one for the team there.
Do the Hellraiser or Lost boys franchises next ha ha.

The only good moment of either of the Lost Boys sequels was the saxophone player, aged and with a pot belly, busking on the side of the street.

I've got the Hellraiser blu ray box set coming for Christmas, so I'll probably review those. Having already watched every other sequel, it's safe to say I'll never watch any of them ever again. Well, maybe Part 4, or the video game one with Lance Henriksen.

Darkweasel wrote:I've got the Hellraiser blu ray box set coming for Christmas, so I'll probably review those. Having already watched every other sequel, it's safe to say I'll never watch any of them ever again. Well, maybe Part 4, or the video game one with Lance Henriksen.

Oh go on watch Bloodline, just for the novelty of thinking about the writers sitting around a table planning it out, thinking "hmmmm, the Hellrasier franchise is struggling a bit, what do we do?....I know, let's blast Pinhead into outer space!".

or watch Deader to laugh at them titling the film with a word that doesn't actually exist.

In terms of Hellraiser I think the first one is okay but a bit overrated, the second one is great, the third one pretty bad, and everything after that is horrendous.
Top

You should do Trancers
Bet it'd be an awful time

some_thing_wild wrote:You should do Trancers
Bet it'd be an awful time

Genuinely thinking about it... 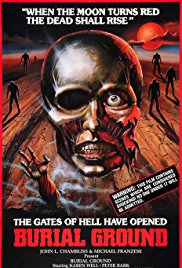 Right from the moment an impressively bearded professor wakes up some zombies and seems genuinely surprised they want to kill him ("But... I'm your friend!") to the final scene which cuts off halfway through because they probably didn't have any money left to finish it, Burial Ground is cheap, stupid, badly dubbed Italian fun.

Gino (Piranha 2, Cannibal Ferox) De Rossi's gore effects are pretty good, but the star of the show has to be twenty-five year old actor, Peter Bark, who because of laws restricting children from appearing in certain types of horror films, plays a ten year old boy who fancies his own mum.

One of those zombie films where the slow moving, shambling undead always seem to catch up with their far more agile prey within seconds, the creatures also appear to be considerably more intelligent than the small cast of hopeless morons who run around in circles doing the exact opposite of what any even remotely intelligent person would do. Oh, and the twenty-five year old ten year old ends up biting off his own mother's tit.
6/10 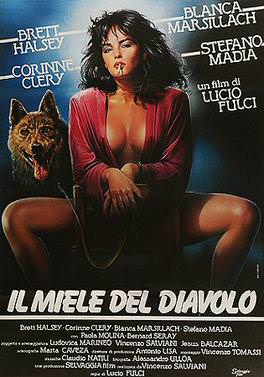 Famous for horror films such as Zombie Flesh Eaters, The Beyond, and The House by the Cemetery, Italian director, Lucio Fulci, after having taken a year off to recover from Hepatitis, returned to film making of a very different variety in 1986.
Without a gateway to Hell or a zombie in sight, The Devil's Honey (aka Dangerous Obsession) is more like Nine and a Half Weeks, but with a saxophone and sexy revenge.

During a recording session in a music studio, really-good-looking-in-a-mid-eighties-Italian-way saxophonist, Johnny, tells his producers to leave the room so his horny girlfriend, Jessica, can make bizarre finger movements and tell him she doesn't want to have sex with him even though she clearly does. Unperturbed, Johnny takes out his secret weapon. No, not that. His saxophone. And proceeds to lift up her skirt and blow it up her fanny. Sexily, of course. This isn't smut, you know. So, with a sweaty face and a rapist's stare, Johnny plays a sexy sax solo directly onto his girlfriend's nether regions which soon results in her taking her top off and grinding her untrimmed '80s ladygarden onto his instrument, sending her into orgasmic shudders, and Johnny's job is done.

After a bit of pointless exposition on a roller coaster, some rather dangerous motorcycle masturbation,and a bit of unwanted bum fun in the country, Johnny crashes his motorbike and, after initially thinking everything is fine, collapses in the studio and has to be rushed to hospital for surgery. Unfortunately for Johnny, the surgeon is having a bit of a mental breakdown, having sex with dirty prostitutes (especially enjoying himself as one of them paints her laddered stockings and hairy bits with bright red nail varnish), and constantly rowing with his wife, mainly about all the dirty prostitutes he's been having sex with. Anyway, the surgeon looks to have made a total bollocks of the operation and Johnny dies, his sexy sax solos never to be heard again. Well, until the many, many flashbacks anyway.

Meanwhile, despite the fact he's been kidnapped, beaten, strangled, fed dog food, had his face, lips, and gums licked (don't even fucking ask), and nearly drowned, the captured surgeon falls head over heels in love with his captor in one of the worst cases of Stockholm Syndrome ever, and after Jessica realises she never really loved Johnny anyway, they both have sex and live happily ever after.
Well, Possibly. The final shot of a gun sat next to the window leaves things pointlessly ambiguous, but by that point you won't care anyway. You'll be far too busy trying to stop hearing sultry saxophone solos playing over everything, everywhere, forever.

Darkweasel wrote:Oh, and the twenty-five year old ten year old ends up biting off his own mother's tit.

Ah man. How to ruin the ending!

Two firsts for me this week. I watched Day of the Dead and Evil Dead 2.

Evil Dead 2 was even more weird than the first one!!
Top

I used to prefer Evil Dead 2 as a kid but now I prefer the original because it's more horror than comedy.

Version I had was just called Brotherhood, but watched this not long ago and was probably the vest war film i've seen. Highly recommend.
9/10

Honourable mention for the polar express because my son loves it even though it's rubbish ha ha.
I see the bad moon arising.
Top

Muppets Christmas Carol
Home Alone 2
Its A Wonderful Life
Black Christmas
Stardust (not even a christmas film, never watched it any other time of the year)

After hating The Force Awakens I wasn't holding out much hope for this one, I also managed to avoid every single trailer and advert for it so had no idea what to expect.
First 2/3 I thought were so boring, and there were some unnecassary scenes that couldve been cut to shorten the runtime,but overall it did get better and there were some cinematic scenes that have to be seen in a cinema. Was crying out for more saber fights too which didnt really happen much.
Overall, 6/10

The Last Jedi is easily the worst of the new Star Wars movies, I would still say overall a good movie. But certainly a lot more unnecessary scenes than any of the others, along with a few continuity issues.
Top

The Force Awakens was good, Rogue One was very good and The Last Jedi was OK. It had good moments but too much wrong with it too.

To be honest, I think only Phantom Menace (which I actually prefer in places) and Attack of the Clones (virtually unwatchable for me) are worse Star Wars movies.
Top

Return Of The Jedi
A New Hope
The Empire Strikes Back
Rogue One
The Force Awakens
The Phantom Menace
Revenge Of The Sith
.
.
.
.
.
.
.
Attack Of The Clones
Top
Post Reply
16662 posts