Got it on now
Top

Welp, Edge retained in a very good match. I reckon Del Rio will win the rumble (and bloody hope) I think Orton will win just because I want to be proved wrong, and... Are there any other matches?
Top

Edge v Dolph = Likely candidate for Match of the Year 2011

Alex Riley is such an interfering lil' bastard

Yay I was right! Also Diesal came back, and what an ovation he did get. Also also, what Morrison did was bloody amazing.
Top

wonder if "Diesel" or Booker T will actually stick around, or whether they'll have been bought back for a one off show.

even if he lost the opportunity the next night on Raw

Rumourmill says that Booker T is under some sort of contract, and while Kevin Nash wasn't, the massive ovation is making the company ponder it.

Also, other things I now remember that were cool, Big Show and Nash sizing each other up, a nice old reference to their WCW days, the spinaroonie after so long, and what was up with Kane's entry? He did fuck all this year...
Top

herzeleid wrote:Yay I was right! Also Diesal came back, and what an ovation he did get. Also also, what Morrison did was bloody amazing.

Yer it could of so easily gone wrong.
Top

I marked out so much when the GM announced that the Diva's match was gonna be a fatal four-way. I honestly thought they were gonna bring out Kong and just have her destroy everyone. How wrong I was

Rey Mysterio to win the belt at Elimination Chamber to face River Albert at WM?

- Regal and Bryan's Europeanfest. Must be an in-joke. They did it on Raw the other week.
- Striker popping for Booker T.

- DIESEL!
- Nexus kill everyone until <C> clears the ring.

- Well done the bookers. Punk and <C> alone in the ring, I thought Barrett would be next out. Hornswoggle. Tyson Kidd to be future endeavoured?

Happy with the result and a good PPV.
Sarchasm: The gulf between the author of sarcastic wit and the person who doesn't get it.

The Sun's summary of the Royal Rumble results is entitled "Del Boy wins a pukka Rumble!" 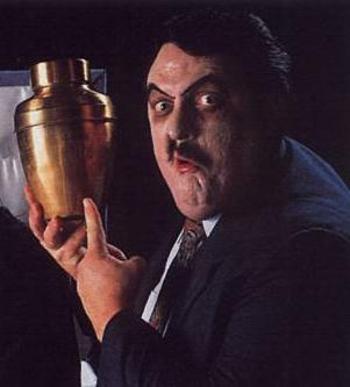 All right, so I MADE a mistake! ONE MISTAKE!
Can't a man start over?! Do I have to keep on PAYING?! HUH?!
Maybe I should make another mistake! ...maybe TWO more!
Top

rey better not win at elimination chamber, i will actually stop watching smackdown if he ever wins the title again, and not start again until he loses it. i genuinely thought cena was going to win it for a while there, but it doesnt really matter cause he's still facing miz at wrestlemania, guaranteed. booker t was pointless, kicked the shit out of nexus but didnt eliminate anyone and ultimately had no impact on the match. lol at nash having dyed his hair too, he looks younger than he did in tna

not sure what they're thinking with him though, especially considering the way they've been pushing younger talent and him openly criticizing them for it not long ago. the title matches annoyed me. vicky openly attacking edge in particular, and cole whining about how it was a travesty that edge used the spear. the wwe title match was awful, way too much interference, why cant they let miz actually win a match alone?

no christian either, bit disappointed really.

Fantastic rumble match imo and alberto's gonna be huge this year i reckon, wwe are pushing him in a better way than they did with seamus and koslov.

The retire fat matt chant was a bit lame tbh as he looked in good condition and was a lot better than he was at genesis!
I can see by that look that you have in your eyes, you came here for metal to fight and to die!
Top
Post Reply
5836 posts